A Portrait of Economic Insecurity in the United States

Winning on equity — creating, for the first time, a society that is just and fair for all — is the central challenge of our time and the work for our generation.

For the past two decades, PolicyLink has been dedicated to amplifying the wisdom and resilience of people of color and low-income communities in order to remake the social and economic systems that deny them a fair shot to participate, prosper, and reach their full potential. PolicyLink and our partners at the Program for Environmental and Regional Equity at the University of Southern California have long been led by the conviction that equity is both a moral and an economic imperative. But amid rising inequality and persistent racial inequities, we need a better way to measure economic hardship in our nation. The official definition of poverty — an annual income of about $12,000 for a single person or $25,000 for a family of four — only tells part of the story.

To implement public policy that brings millions of people into the middle class, organizers, advocates, and policymakers must be clear about who has been excluded. To transform institutions to tap into the potential of people of color and low-income communities rather than locking them out of national prosperity, we have to be sure that no one is being left behind. To achieve equity at scale, we need to be thinking big.

This report offers an important first step: an expanded definition of economic insecurity that reveals that more than 100 million people in the United States are struggling to make ends meet. It includes some powerful insights on this population, and on the depth of the impact that systemic inequities have on our society. Our nation is missing out on a wealth of cultural wisdom, innovation, skills, passion, and energy when one-third of our population remains relegated to the sidelines. We all stand to win when everyone is brought fully into the fold — in 2015 alone, the U.S. left $2.5 trillion in economic activity on the table due to racial gaps in income.

We are a nation of innovators, and our history proves that we know how to accomplish transformational results in the face of big challenges. We’ve achieved extraordinary inclusion and systems change before — now we need to achieve them for everyone. In 25 years, the United States will have a people-of-color majority, and with one-third of the population suffering from economic insecurity, the nation is at a tipping point. Now is the time to align efforts across issue areas, sectors, and geographies to get equity right for those who have been left behind, so we can all share in the benefits of reaching our collective full potential. 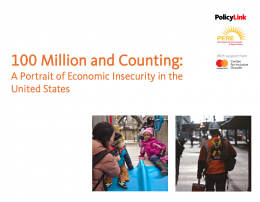